Studies in Late Antiquity assume that the ancient Mediterranean was a kind of bottleneck which exerted considerable influence on all subsequent developments in the region. This basic assumption is also the basis of Almut Höfert’s study. Being both a scholar of history and Islamic studies, she uses an interdisciplinary approach and implements a transcultural comparative perspective in her recent book.

“Kaisertum und Kalifat. Der imperiale Monotheismus im Früh- und Hochmittelalter” impresses with its theoretical basis and convinces with a structured, comprehensible analysis. Being the authors’ habilitation thesis, it evaluates a large number of Arab, Greek and Latin sources. These include texts, coins and inscriptions that are assignable to four “universal monarchies”. Based on this, Höfert postulates a successively developing “imperial monotheism” discernible first in the East Roman-Byzantine Empire and later – slightly different – during the Umayyad and Abbasid caliphates. Later, this “imperial monotheism” also appeared in the counter-Caliphate of the Shiite Fatimid state. In an analogous way, the Byzantine Empire was also confronted with a counter-empire: the Latin Empire that had similar structures from 800 onwards. In summary, all these dominions worked according to the same principle: one god, one ruler, one empire, one faith. Höfert’s argument is that the imperial monotheism manifested therein marks the connection between the piety of the ruler and his political rule in every universal monarchy. It is her aim to show that the four mentioned universal monarchies are part of a common historical development, influencing each other and developing a common pattern between religion and rule characteristic for their time and region. Höfert also re-evaluates several disciplinary master narratives that aim, among other things, to portray Europe as a pioneer in the separation of religion and politics, while in Islam both were merged inseparably from the beginning.

Taking into account the wide scope of this study, the reader has to accept some constraints. In order to be able to compare such broad fields, Höfert had to choose quite restrictive categories of comparison. As a result, many issues remain undiscussed and unresolved. Experts in either of the fields covered by Höfert’s book will undoubtedly notice an absence of these issues and may learn little from this study, because her main concern is precisely to point out the profitable possibilities of a transcultural comparison without being bound to only one discipline. Even though her study is vulnerable from that point of view, studies like Höfert’s, which focus on clearly defined aspects from a new perspective – in this case the transcultural comparison – are the ones that prepare the field for further individual studies. That is why one can strongly recommend Höfert’s study, provided that the reader is willing to plunge into the still young field of transcultural studies. The study under review shows that it is possible to break out of (and redefine) apparently clearly defined forms of rule from their predominant religious-cultural or epochal attributions.

The full-length German-language review by BOAS_insights editor Florian is part of the FORUM Vormoderne Transkulturalitätsforschung (pre-modern Transculturality studies) at sehepunkte.de, curated by our advisory board member Professor Stephan Conermann. You can read it here: http://www.sehepunkte.de/2017/05/29983.html
at April 01, 2019 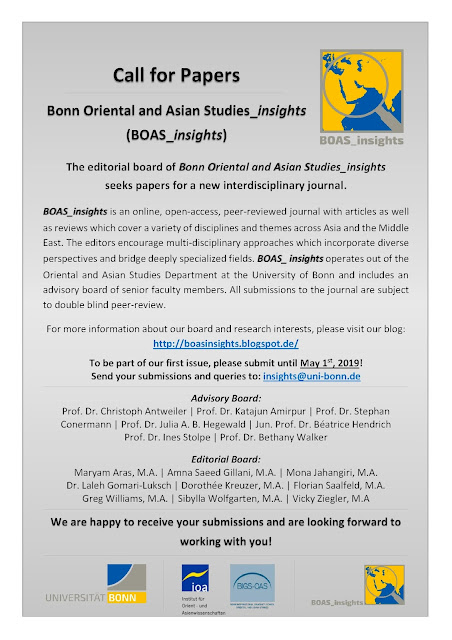